Back to all posts

Janis Joplin takes a piece of my heart... 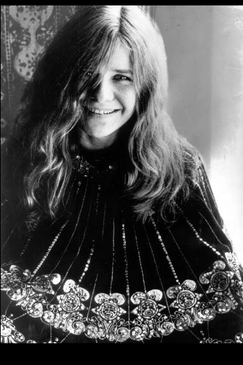 On October 19th, 1968…forty-six years ago today, I came face to face with Janis Joplin.  The circumstances were unlikely and unplanned…but isn’t that the way so many peak moments happen.  The band Big Brother and the Holding Company featuring Janis were scheduled to perform a concert at Penn State’s Rec Hall which held about 6,000 people. The concert was to begin at 8pm and the energy in the hall was high…probably in more ways than one. 8pm became 8:30 and the crowd was getting restless when an announcement was made that the band’s plane was late, but to please be patient, they would definitely be performing that night.

I was there along with my bandmates from our senior-year band, “The New Old-Time Wooley Thumpers”, a group that performed a strange conglomeration of original songs and covers infused with a somewhat twisted but often hilarious sense of humor.  As 8:45 became 9:00, and the crowd became more impatient, we were approached by one of the people in charge of the concert.  “The crowd is getting restless,” they said… “Would you guys consider getting your instruments and performing an opening act until Janis and the band get here?”  Up to that point, the largest crowd we had played for was 1,100 in Schwab Auditorium, another venue on the Penn State campus. 6,000 people was a bit more intimidating, especially when they were impatiently waiting to hear Janis belt out her songs as only she could… but, what the heck, we said “Sure.”

We hustled out of the building to the car we’d arrived in, made the circuit to each of our apartments, loaded up our equipment, and made it back to Rec Hall in record time.  Next came setting up the equipment on stage in front of the full house, which we accomplished in chaotic fashion, but record time.

We performed about half a dozen songs with the crowd in, maybe, the front third of the hall paying attention and applauding, and those in the far reaches continuing to talk and wait impatiently. After the first song jitters were gone…it was fun.  Finally, around 10:00, we got the signal that Janis and the band had arrived.  We tore down the equipment, got it off the stage with the help of the organizers, and took a front-row seat for the rest of the concert…our perk for helping to keep the crowd entertained and calm.

Out came Janis, walking up the steps to the stage a few feet from where I sat.  The band struck the first chord and she sang her heart out for nearly two hours, reaching for her famous bottle of Southern Comfort between each song…but oh, that woman could sing.  She reached down deep, bared her soul, and blew the roof off the place. When they were done, Janis came down those same stairs a few feet away, staring glassy-eyed into space like a deer caught in the headlights. Later, after the crowd left, Janis came back out to the stage area and someone handed her one of those yo-yos with bulbs inside that would light up when you'd spin it. She started to play with it, smiling and laughing like an innocent child. When she was on stage singing about relationships, love and heartbreak, she was all woman…but afterward, with that toy to play with, she was like a little girl. Just under two years later, Janis was gone. She was one of the musical Super Novas that burned with blinding light and then vanished at the age of twenty-seven…like Jimi Hendrix, Jim Morrison, Brian Jones, and later Kurt Cobain… but that night she gave it all in every note she sang until she had no more left to give. One of her biggest hits at the time included the lyric, “Come on take it!…Take another little piece of my heart, now baby.”  That night… she took a little piece of mine.